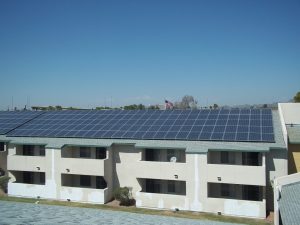 Harmon Solar was selected by APS as the solar installer for four projects in Greater Metro Phoenix as part of the utility provider’s Low Income Residential Partnership Program (LIRPP), a competitive grant process for low-income or non-profit housing facilities. Initially, Harmon Solar was asked to assess the cost of solar for a variety of residences, and APS ultimately decided upon Varney Homes, Fillmore Gardens, Maggie’s Place, and Casa Bonitas.

Completed in August of 2011, the first project was for Varney Homes, a 12-unit, low-income, multi-family housing complex. The Housing Authority of Maricopa County was awarded a grant under LIRPP for 12 systems, with 148 panels spread out among six buildings (in two separate locations). Combined these generate 34kW, with an estimated annual energy savings of approximately $7,200. Also completed in the summer of 2011 was the solar installation for Maggie’s Place, a community of homes that provides hospitality for pregnant women who are alone or on the streets. The non-profit organization received the grant under LIRPP allowing for four solar systems totaling 74 panels, which were installed on four separate buildings. They equal more than 17kW, generating an annual energy savings of approximately $3,600.

Nearly complete, the final project is for Casa Bonitas, another low-income multi-family housing development under the Housing Authority of Maricopa County. The LIRPP grant allowed for a 99.82kW system, which contains 434 panels installed on the roofs of 16 different buildings.  This system is anticipated to save more than $21,000 in energy costs annually.