The Phoenix Suns have gone green. The professional basketball team, in association with Arizona Public Service and the City of Phoenix has installed a 17,000 square-foot solar panel array to the roof Sun’s US Airways Center of the parking garage.  The 966 panel structure will generate an estimated 378,000 kilowatt-hours per year.  The new solar power system will eliminate the generation of more than 440,000 pounds of carbon dioxide (CO2) per year from the environment. This means that 20 Sun’s home games will be powered by clean, renewable energy. 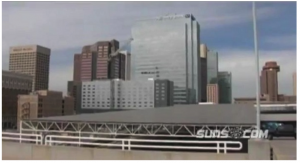 Installed to the roof of the parking garage of the US Airways Center, nicknamed The Purple Palace by Suns fans, the APS Suns Powered Solar Structure is part of a state-wide initiative including an even larger project at the Phoenix Sky Harbor International Airport.  Like Phoenix, the Arizona Corporation Commission also has plans for a greener Arizona. It is requiring utility companies to generate 15 percent of their electricity from renewable-energy sources by 2025. Donald Brandt, CEO and president of APS parent company Pinnacle West, said APS is well on track to fulfill the 15-percent goal, producing 900 megawatts from renewable energies. 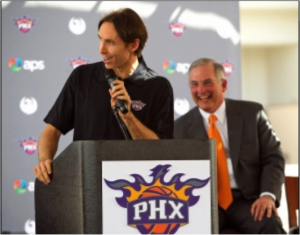 Steve Nash says, “The spirit of innovation and environmental consciousness shown by the Suns, APS and the City of Phoenix is something I’m proud to be a part of,’

Suns point guard and NBA All-Star Steve Nash, a long-time environmental activist was a driving force for the solar installation and participated in the dedication ceremony.

“The spirit of innovation and environmental consciousness shown by the Suns, APS and the City of Phoenix is something I’m proud to be a part of,” said Nash. “I’ve become very passionate towards environmental issues over the years, so it’s great to know that solar power is now impacting my life both at home and here at work.” Nash has been an advocate for the APS’s campaign to promote renewable energy since 2008.

In addition to being the home of Phoenix’s NBA team, US Airways Center also hosts concerts, conventions, ice hockey and other events. The Suns have embraced the campaign to increase energy efficiency by switching to long-lasting light bulbs, improved recycling practices and even an employee carpool. Phoenix Mayor Greg Stanton said the Suns rooftop solar project is part of the city’s effort to become a sustainable city.

The APS Suns Powered Solar Structure cost an estimated $1.25 million with the panels, manufactured by the Japanese Kyocera Group. APS officials said the project’s annual cost will fall under $1 million because of a federal incentive from the U.S. Department of Energy that drops the expense by 30 percent.

It is fitting that Phoenix; a city with the highest average number of sunny days would choose to make the Phoenix Suns truly solar powered. Other teams are quickly following the Phoenix Suns’ lead; the Staples Center in Los Angeles installed a 25,000-square-foot array in 2008, Boston’s world famous Fenway Stadium uses solar to heat its water and just recently the Philadelphia Eagles announced plans to install both wind and solar power systems at Lincoln Financial Field.

Harmon Solar can help your home or business save money and help save the planet. Contact Harmon Solar today for a free solar consultation.