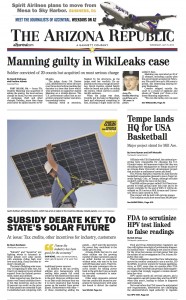 As the debate over solar subsidies and net metering marches on, Harmon Solar’s very own Dan King weighs in with his thoughts about the solar industry in today’s Arizona Republic cover article. According to King, “I know the industry has been good for the economy.” Harmon Electric, the parent company to Harmon Solar was able to flourish in a down economy in large part because of Arizonans growing desire for energy independence. With the addition of Harmon Solar, the company has been able to steadily increase its number of employees, adding more than 90 jobs to the local economy in less than 8 years. APS’s recent proposal to change its net metering policy has created statewide discussion about finding a balance between the utility company’s needs, while still ensuring residential solar remains a viable alternative energy source. Industry leaders fear APS’s current proposal will have a negative impact on the future of solar in Arizona. With the state’s solar industry still in its infancy, support from the federal government, states and utilities is still critical to ensure solar is able to take root. To read the complete Arizona Republic article, click here.