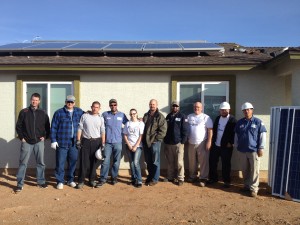 On a cold, windy Saturday morning earlier this month, employees from Harmon Solar and Harmon Electric volunteered their time to install a donated solar system on a Habitat for Humanity Central Arizona Home in North Phoenix. The install took place the same day the Sabbara family moved in to their new home.

The 12-panel, 2.7 kW solar array could initially save the new homeowner up to $600 per year on energy costs. Converting to clean, solar energy will eliminate a huge burden for this single mother of three on a tight budget. Additionally, her savings are anticipated to increase as energy costs are expected to rise annually.

Harmon Solar rallied the support of vendors to donate a portion of the equipment for the photovoltaic system, and the company covered the remainder of the parts, plus labor for the installation. Aside from Harmon Solar, Conergy Solar, ProSolar, City Lights Electrical Services, R & R Structural Engineers, and Specialty Roofing donated supplies for the solar arrays. The system is valued at approximately $9,500.

Serving Arizona since 1985, Habitat for Humanity Central Arizona builds, renovates and repairs homes in partnership with families in need. Construction of this Habitat home was made possible by a generous contribution from Thrivent Builds with additional assistance by Federal Home Loan Bank in partnership with member bank National Bank of Arizona.