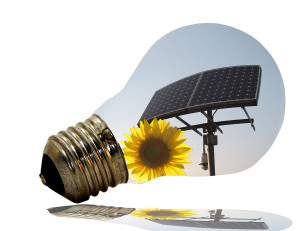 So how does solar power work, anyway?

We’ve been chasing solar power as a practical energy source for a very long time. In fact, the first working solar cell was invented in 1839!  About fifty years later, the first working  solar panel was created, however it could only capture about 1% of the solar energy.

That’s been the primary stumbling block in solar power: energy efficiency.  A solar panel has to be able to capture enough energy from the sun to justify its existence.  It wasn’t for another fifty years, in 1946, that the first practical design for a useful solar cell was patented.  By 1958, solar cells were being attached to early satellites sent up by NASA, and the rest is history.

The Photovoltaic Effect In Action

The pivotal discovery in 1839 that ultimately led, 150 years later, to today’s solar power was that of the photovoltaic (PV) effect.  It’s still the basis of modern solar cells today.

Basically, the PV effect is this:  Take two sheets of a semi-conducting material like silicon.  Treat one with boron to give it a positive electrical charge.  Treat the other with phosphorous to give it a negative charge.  Then sandwich them together.

When a strong radiation source – like the sun – hits the negatively-charged panel, it excites the electrons within it, causing them to break free of their atomic bonds.  They jump over to the positive plate, bringing with them a small electrical charge.

This is then captured on wires and redirected to a battery, or an inverter to create AC current.

Leasing Brings You Solar For Less

The other recent revolution in solar power is leasing:  Rather than paying for the panels up front, you can lease them from a solar provider while receiving locked-in energy rates without seasonal fluctuation.

If you’re thinking about the energy source of the future, contact Harmon Solar for more details! 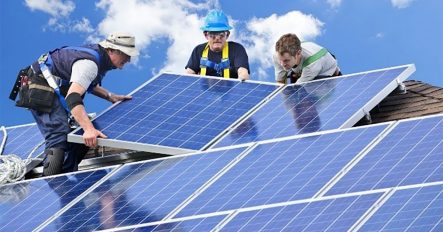 How is Solar Power Delivered?

Solar power uses energy from the sun to generate electricity. This renewable energy source is fully backed by science, but ...

You Decided To Go Solar. Now What?

There are many reasons to switch from traditional energy to solar power in your home. Whether that is due to ...