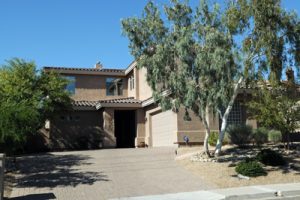 Like many Valley transplants, the extremely hot summer months take some getting used to. While most newcomers eventually adjust to their new climate, the one thing that never seems tolerable is the high utility bills that are inevitable for five months out of the year. T.J. and Roni Todd are no exception to this scenario, but rather than accepting this was just part of living in the Valley of the Sun, they decided to take matters into their own hands.

At the suggestion of APS, the Todd’s tried a time-of-use energy plan, a home energy audit and duct repairs, but these steps didn’t do much to diminish their $550 utility bill. A certified public accountant, T.J. knew they needed a long-term financial solution, which would ultimately prove to be an investment in the mountain home they loved so much.

The Todd’s began researching photovoltaic companies in Arizona, and they chose Harmon Solar. Their 8,970 watt, 39-panel system was installed on the roof of the two-story, 3,100 square foot home in the fall of 2010. In one year, the Todd’s have already reaped the rewards of their investment. Most months, the Todd’s only pay a small billing and meter fee of $20 per month, and the highest bill they have paid for electricity is $150 – a savings of 65% or more every month on their utility costs. The Todd’s also estimate the investment will pay off in seven or eight years and add value to the home, especially as energy costs rise.

The Todd’s were so excited about their Harmon Solar system they agreed to be part of the Sunnyslope Home Tour that took place November 19-20. Out of five stops on the tour, the Todd’s home was the only one with solar. Their home was such a popular showpiece, it was even written about in a recent Arizona Republic article. As an ambassador for Arizona Smart Power, a non-profit organization dedicated to helping Arizona residents make smart energy choices, T.J. knows how important it is to educate the public about the benefits of solar energy. The couple hopes that by opening up their home to the public, they helped those who may be unsure how to go about reducing their energy dependence.